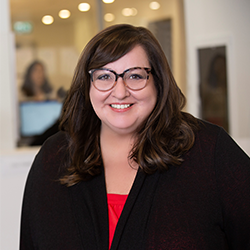 Samantha Howard is the Vice-President, Legislative Affairs, Western Canada for the Canadian Federation of Independent Business. In this role, she leads the advocacy team across the western provinces and serves as a government lobbyist who represents CFIB's members across west. Working on behalf of small-and medium-sized business, Sam pays special attention to such matters as government spending and taxes, workers' compensation, red tape, and labour laws.

Samantha has more than 15 years of experience in public relations, communications management, and public policy. Prior to joining CFIB, she worked at BC Hydro as a Stakeholder Engagement Analyst for their Major Capital Projects division. She worked previously for the Province of British Columbia for eleven years in numerous roles, including as Chief of Staff to the Minister of Finance and Deputy Premier, the Ministry of Small Business and Revenue, and the Ministry of Small Business, Technology and Economic Development. While in government, Samantha was instrumental in the creation of the permanent small business roundtable and was a catalyst for the Regulatory Reform Criteria Checklist and Small Business Lens.

Prior to joining the BC government, Samantha managed small businesses in the retail and restaurant sectors.  She has a Diploma in Hotel and Restaurant Administration and is certified by the International Association for Public Participation.