VANCOUVER, September 20th, 2018 – With exactly one month to go until the October 20th municipal elections across the province, the Canadian Federation of Independent Business (CFIB) has released a report on the massive property tax burden business owners’ face in BC. The findings show businesses in BC’s 20 largest municipalities pay nearly two and a half times more taxes than they should.

CFIB analyzed the per cent of total property taxes business owners paid versus the portion of property value they represent, otherwise known as the “property tax share” or “assessment share”. In a fair system, the values should be roughly the same, where business owners pay taxes based on the value of the property they own or lease.

Unfortunately, in the twenty largest municipalities this was far from the reality. In 2018, business owners across BC paid close to 30 per cent of the total property tax bill, yet accounted for just over 12 per cent of the total property value. The difference between the two, termed the “Property Tax Fairness Ratio” reveals business owners pay approximately 2.4 times more municipal property taxes than what would be reasonable based on the value of their property.

“It is deeply concerning to see some of BC’s biggest cities treating business owners like cash cows,” said Richard Truscott, Vice President, BC and Alberta. “Business owners are more than willing to pay their fair share, but too often they are being unfairly squeezed by their local government. With just a month to go to the election, candidates need to start talking about ways to fixing this big tax imbalance for small business.”

The ratio varies greatly across the 20 largest municipalities. The worst tax fairness is found in Saanich, where business owners pay 23 per cent of the tax bill yet make up just 6.7 per cent of the total property value, representing a Property Tax Fairness Ratio of 3.46. Coquitlam and New Westminster had the second and third worst tax fairness ratios. See the table below for a full list of the ratios for the 20 largest municipalities in BC.

“It’s encouraging to see places like Prince George get it right. Business owners deserve to operate without a massive tax burden placed on their shoulders each year,” continued Truscott. “When local businesses are treated fairly, they are able to do what they do best: hire local, provide goods and services to their fellow residents, and help their community grow.”

The report also finds little has been done to improve the tax imbalance over the past decade.  The average property tax fairness ratio in the 20 municipalities was 2.38 in 2008 and 2.39 in 2018.

“CFIB is calling on all election candidates to pledge they will work to create a more balanced approach,” concluded Truscott. “By better controlling spending, they can reduce the burden on business owners while keeping it steady on residents.”

To arrange a media interview with Richard Truscott, please call 604-684-5325 of email ms.bc@cfib.ca after 8.30AM PT. The full report is available ​here

CFIB is Canada’s largest association of small- and medium-sized businesses with 110,000 members across every sector and region, including 10,000 in B.C. 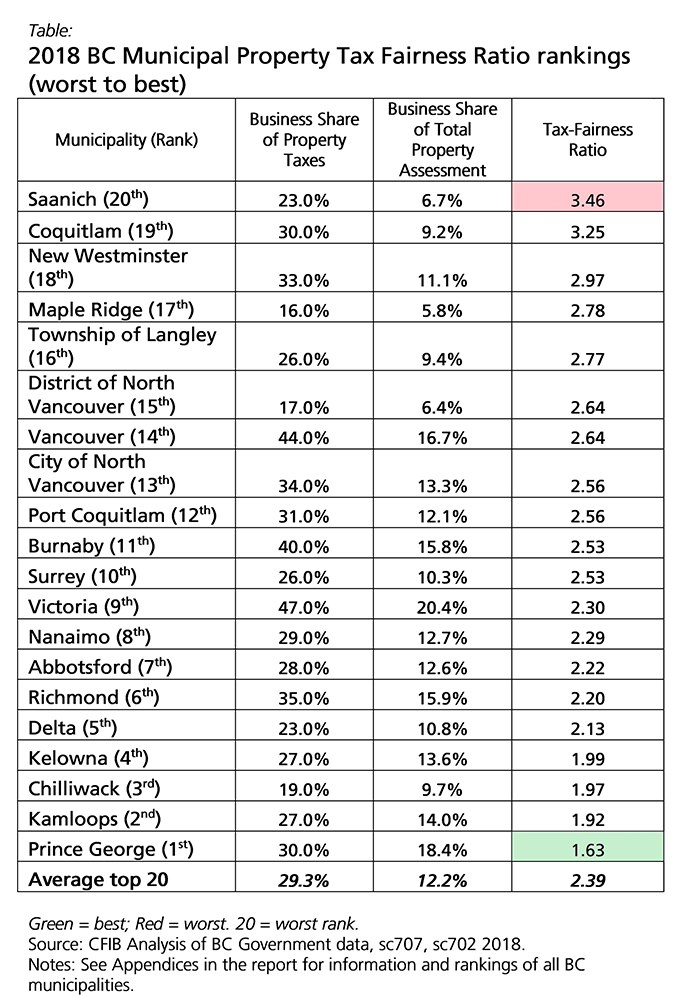 Big hike in minimum wage is a big disappointment