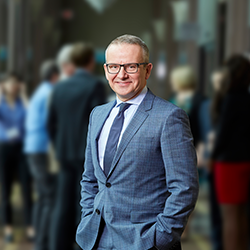 Dan Kelly serves as CFIB’s President and CEO and, in this role, is the lead spokesperson and advocate for the views of the organization’s 95,000 members.

Dan started his CFIB career in 1994 as a Policy Analyst in his hometown of Winnipeg. Dan later held various positions across Western Canada, including serving as Vice-President based in Calgary. In this role, Dan focused on the growing shortage of labour and the need for improvements to immigration and foreign worker systems.

Before becoming President and relocating to Toronto in 2012, Dan served as CFIB’s Senior Vice-President of Legislative Affairs based in Ottawa. While in Ottawa, Dan focused on the need for major changes in the payments industry and drafted the first version of Canada’s Code of Conduct for the Credit and Debit Card Industry.

Dan has served on dozens of provincial and federal committees and task forces, and currently serves on Finance Canada Payments Consultative Committee (FINPAY). He has also represented Canada’s small businesses at the International Labour Organization in Geneva.

In 2015, Dan was named one of the “Top 100 most powerful and influential people in government and politics” by Power & Influence Magazine, and is regularly featured on lists of Canada’s top lobbyists. Dan is a regular speaker in Canada and around the world on topics such as international trade, the payments industry, and skills and labour shortages.

Dan was born and raised in Winnipeg and graduated with a Bachelor of Commerce from the University of Manitoba. He now lives in Toronto with his wife Nylia and son Kennedy.