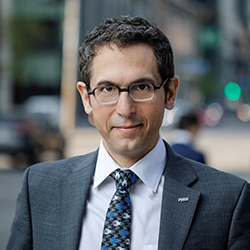 As Vice President, Québec, François Vincent leads a team that advocates for the interests of small and medium-sized enterprises (SMEs) in the province. He meets with policy makers at the municipal, provincial, and federal levels to ensure that the actual experience of SMEs is taken into account in public policy development. He also reviews legislative bills that will have an impact on businesses and is active in the media on behalf of SMEs.

François has been active in the field of government relations for 15 years. From 2016 to 2019, he worked at the Association des professionnels de la construction et de l’habitation du Québec (APCHQ), where he became Vice- President of Government Relations and Public Affairs. Prior to joining APCHQ, François was Director of Provincial Affairs for Quebec at CFIB, where he worked for seven years and returned to in late 2019.

François has been able to enrich his expertise due to a number of opportunities outside of Quebec. He was an intern at the National Assembly of the French Republic in 2008 and was a Fellow of the Action Canada Leadership Program in 2010. In 2015, he was selected for the France Aspen Institute's Young Political Leaders seminar on Europe, which was held in Paris and Brussels.

François holds a Bachelor’s Degree in Communications and Politics and a Certificate in Law from the Université de Montréal, as well as a post-graduate degree in Management from HEC Montréal.