Regulatory Costs in Canada and the United States: A Small Business Perspective 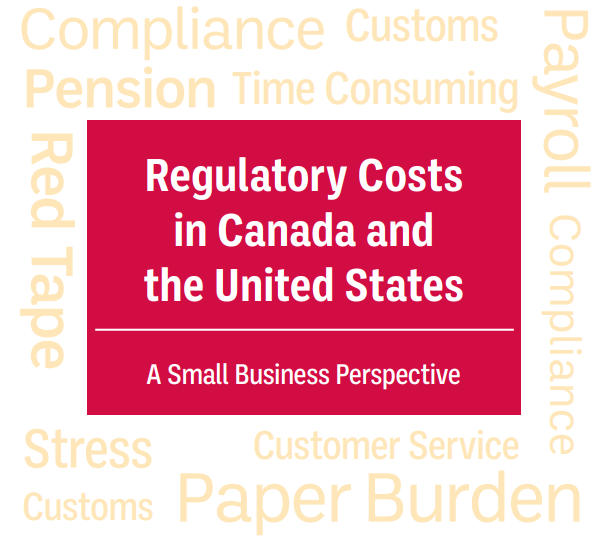 In this report, the Canadian Federation of Independent Business (CFIB), with sponsorship from Intuit Canada, partnered with the Small Business Roundtable to survey businesses in the United States (U.S.) to consider the impact of regulation on businesses in both Canada and the U.S. This is the second time that CFIB has conducted a comparison between the cost of red tape in Canada and the U.S. Though the first analysis of this kind was done in 2013,1 our report remains one of the only studies2 that compares both the cost of necessary regulation and excessive regulation (red tape) between the two countries.

While regulation is a key component of a well-functioning market economy, unnecessary regulation undermines productivity, lowers wages, and attacks the entrepreneurial spirit for no discernable benefit. In a reversal of previous results, current data shows that U.S. businesses dedicate more time spent to regulatory compliance than Canadian businesses. As can be seen in Figure 1, the smallest U.S. businesses spent an average of 263 hours per employee, including 88 hours on rules deemed unnecessary, complying with government regulation, while those with 100 or more employees spent only 19 hours. Canadian businesses fared better in comparison, though there is still significant room to reduce red tape. The time required for compliance, including on red tape, in both countries is still higher for businesses with fewer than five employees than any other business size.

Looking back to our 2013 analysis, the average time spent on regulation per employee in Canada has stayed relatively stable. For example, in 2013 the smallest Canadian businesses reported spending a total of 171 hours each year on regulatory compliance (see Table 1), whereas they report spending 165 hours as of 2020. Conversely, the time spent by the smallest U.S. businesses on compliance has grown significantly over the same period, from 130 to 263 hours.

U.S. businesses attribute a higher share of their regulatory burden to being red tape (36%) in comparison with Canadian businesses (28%).3 The share attributed to red tape has remained relatively stable in Canada (29% in 2013), while there has been a notable uptick in the U.S. since 2013 when it stood at 32 per cent.

As of 2021, the total cost of regulation to U.S. businesses is estimated to be $364.3 billion USD, and $31.9 billion USD for Canadian businesses. This is largely explained due to major differences in the size of the two economies. It is more telling to examine the per-employee costs of regulation. As with hours spent on regulation, the smallest businesses pay significantly more per-employee. In Canada, the smallest businesses spend more than nine times as much per employee on regulatory compliance compared to the biggest firms, while the gap in the U.S. is even larger, with small firms paying nearly fourteen times as much. Although these numbers exclude the costs of complying with COVID-19 related regulations, it should be noted that such costs are not trivial for businesses in either country.

With these results in mind, it is unsurprising that over 80 per cent of businesses in both countries say it is important that their local/municipal, state/provincial, and federal governments be committed to reducing red tape. When asked if those same governments were committed to doing this, however, a strong majority of businesses expressed a lack of confidence in their respective governments. This signals that red tape reduction and regulatory modernization should continue to be a key area of focus for governments in both countries when it comes to addressing the priorities of their small business communities.

CFIB would like to thank Intuit Canada for sponsoring this year’s report and the Small Business Roundtable for partnering with us on the U.S. survey and report. This edition compares regulatory costs in the United States with those in Canada, as were last determined in Canada’s Red Tape Report for 2021.