For months, Manitoba businesses had to deal with closures, capacity limits, and declining revenues. 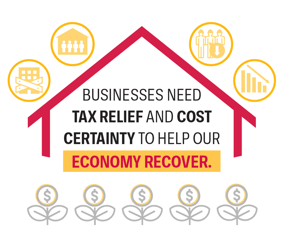 CFIB has pushed hard for improvements to the Health and Post Secondary Education Tax Levy (HE Levy) and is making progress.

Beginning January 1st, 2023, the new exemption threshold will be $2 million in total payroll. BUT THERE IS MORE WORK TO DO.

While the Government of Manitoba announced plans to eliminate all education property taxes over 10 years, its short-term plan to phase them out means businesses are paying more than their fair share.

In 2022, a homeowner in the City of Winnipeg is receiving credits and rebates equal to 49% of their tax bill – but a commercial property owner receives just 10% back for the same assessed property value, and PAYS 5.6 TIMES as much in education property taxes!

Manitoba basic personal amount is the third lowest in Canada!

Manitoba’s Basic Personal Amount (BPA) is the THIRD LOWEST in Canada, behind only Nova Scotia and Newfoundland and Labrador. Increasing the BPA is a top tax relief priority for small business owners.

However, the Government of Manitoba BROKE PROMISES in 2016 and 2018 to significantly increase the BPA and move it closer to the national average.

The Manitoba government must take action and announce policies that will support small businesses.